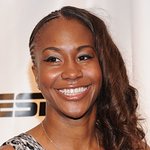 The Women's Sports Foundation (WSF) — the leading authority on the participation of women and girls in sports — celebrated the biggest night in female sports at its 36th Annual Salute to Women in Sports Awards gala at Cipriani Wall Street in New York City.

The Women’s Sports Foundation’s coveted 2015 Sportswoman of the Year award was presented to Serena Williams (Tennis) in the individual category; Carli Lloyd (Soccer) in team category. The award is bestowed upon athletes who have distinguished themselves in their sports field through their supreme athletic performances over the past year.

Eleven-time Paralympic medalist Tatyana McFadden (Track & Field, Cross-Country Skiing) was honored with the Wilma Rudolph Courage Award. McFadden has defied obstacles since she was a young girl to become one of the most dominant athletes in Paralympic Track & Field and Cross-Country Skiing, while also advocating for equal access for students with disabilities. Tatyana and her mother helped pass Maryland Fitness and Athletics Equity for Students with Disabilities Act (2005) that mandates that schools provide competitive opportunities for students with disabilities in interscholastic athletic programs.

The Billie Jean King Contribution Award, an honor that recognizes an individual or organization who has made a significant contribution to the development and advancement of women’s sports, was awarded to Dr. Don Sabo, Ph.D. a Professor of Health Policy at D’Youville College. Dr. Sabo’s pioneering research is a catalyst for the advancement of girls and women in sports and uncovers the lifelong benefits of participation on their health and well-being.

“Forty-one years ago we founded an organization to recognize the accomplishments of the world’s greatest women athletes just like we are doing here at tonight’s Salute,” said WSF Founder Billie Jean King. “We have seen great momentum and breakthroughs this past year for female athletes, coaches and commentators and we came together tonight to celebrate those moments, and to commemorate the impact the Foundation has on women and girls each and every day.”

Julie Foudy and Jessica Mendoza opened the fundraising gala, beginning with a celebratory toast to Jessica’s historic achievement of becoming the first female in-game analyst for an MLB game on ESPN in August. The evening then proceeded with the traditional Grand March of Athletes where all 75 athletes in attendance were honored for their contributions to their sports.

Angela Hucles, WSF President, two-time Olympic Gold Medalist for U.S. Soccer, two-time World Cup Bronze Medalist, took the stage in her first Salute as President to discuss the ongoing initiatives that WSF has focused on in the past year, specifically showcasing the Sports 4 Life program. Sports 4 Life is a national effort to increase the participation and retention of African-American and Hispanic girls in youth sports programs. By making sports more accessible, Sports 4 Life gives young females the chance to learn the foundational benefits of sports, such as leadership, confidence, self-esteem, and perseverance. This year, WSF awarded $110,000 in funding to 22 grantees to serve more than 6,800 middle and high school girls across the nation. All of the money raised in the room this evening will go towards 2016 grants, which is now accepting applications for the coming year.

“The Women’s Sports Foundation is dedicated to creating leaders by giving girls access to sports. With support from the community, who is on the ground activating, to the corporations who support our mission by making it financially realizable, we are able to collaborate, educate and advocate for more opportunities and exposure for girls’ and women’s sports,” shared Deborah Slaner Larkin, CEO of the WSF. “We are privileged to host the Annual Salute so we can gain new ambassadors and spread awareness about our mission to ensure all girls have the chance to play.”

The 36th Annual Salute to Women in Sports was co-presented by espnW, FOX Sports, Gatorade and NBC Sports Group.