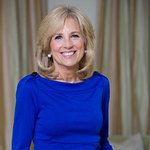 To mark its 75th anniversary, the USO welcomed tour veterans, Medal of Honor recipients, military leaders, corporate partners and members of the USO Congressional Caucus to a reception earlier this month at The Hay-Adams, a historic hotel and Washington, D.C., landmark.

Dr. Jill Biden delivered remarks to kick off the evening and Tina Tchen, first lady Michelle Obama’s chief of staff, read a letter from President Barack Obama honoring the USO on its anniversary.

Actor Dennis Haysbert hosted the evening’s festivities and shared a few anecdotes from his USO tour experiences before introducing Retired Army Gen. George W. Casey, Jr., the chairman of the USO Board of Governors. Casey, the 36th Army Chief of Staff, recognized Bob Hope's daughter, Linda, and thanked her for her family’s continued commitment to the organization.

“We will never forget your dad and the way he boosted the morale of American service members around the world and brought those brave men and women home to us by televising his USO tours,” Casey said.

To read the full article and to see photos, click here.