Kristen Johnston Bares Her Soul - And More - For PETA 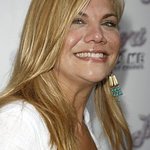 Former 3rd Rock From The Sun actress Kristen Johnston has appeared in a sexy new advert for PETA.

The 41-year-old actress has stripped off for the ad and appears in a Lady Godiva-type pose on horseback in a bid to stop New York’s horse-and-carriage industry. She joins a host of other stars who have already raised awareness of the plight of the horses used to tow carriages around Central Park, including Pink, Chrissie Hynde, and Alec Baldwin.

According to PETA: “Horses used in the horse-drawn carriage industry are deprived of everything that is natural and important to them. These gentle, social animals are denied the opportunity to socialize with other horses, graze in fields, and run free.”

“I was blown away by how these horses live, or actually I should say, don’t live,” said Johnston. “The horses go from this horrible job, where they’re pulling people through the streets of Manhattan all day, to this tiny jail cell in this building that’s like a cramped parking garage. I’d say to tourists considering coming to New York, there’s so much amazing stuff to do here. But please do something else. Go ice-skating, see a show, go shopping. I hope within the next year that there are no more horse-drawn carriages.”

The advertising campaign will debut in Central Park on Thursday, November 20, and has drawn support from New York City council member Dan Garodnick, who aims to phase out horse-drawn carriages and replace them with eco-friendly “horseless carriages.”