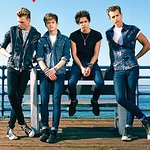 James McVey, the lead guitarist for The Vamps, has proved that he’s as compassionate as he is talented by starring in his second PETA campaign to promote kindness to animals – this time through meat-free meals.

In the advert, McVey proclaims that “Chicks Dig Vegetarians” and goes on to stress that choosing plant-based fare is an important and easy way to reduce animal suffering, saying, “There are tons of ways that we can all help animals, and I think number one should be keeping them off our plate”.

In an exclusive video interview with PETA , McVey points out that smart, sensitive chickens don’t belong in recipes any more than puppies do: “Chickens are intelligent animals, just like dogs and cats. … [T]hey’re not animals that should be used for nuggets or drumsticks.”

In addition to sparing many animals every year immense suffering on factory farms, in abattoirs, and on the decks of fishing boats, going vegetarian also lowers a person’s risk of suffering from heart disease, cancer, and obesity – and drastically reduces one’s carbon footprint. That’s why McVey and PETA – whose motto reads, in part, that “animals are not ours to abuse in any way” – encourage everyone to order a free [“vegetarian/vegan starter kit”http://action.peta.org.uk/ea-action/action?ea.client.id=5&ea.campaign.id=10010] today.

McVey previously starred in a PETA campaign promoting adoption of homeless animals. He joins a growing list of celebrities – including Vivienne Westwood, Sir Paul McCartney, John Bishop, Joss Stone, Lucy Watson, and many more – who have teamed up with PETA to promote meat-free meals.