The $1.1 Million Aurora Prize for Awakening Humanity was awarded this week to Dr. Tom Catena, a Catholic missionary from Amsterdam, New York who has saved thousands of lives as the sole doctor permanently based in Sudan’s war-ravaged Nuba Mountains.

The Aurora Prize, granted by the Aurora Humanitarian Initiative on behalf of the survivors of the Armenian Genocide and in gratitude to their saviors, was announced at a ceremony in Yerevan, Armenia. He was selected as the 2017 Aurora Prize Laureate from more than 550 nominations submitted from 66 countries.

George Clooney, Academy Award-winning actor, Co-Founder of both The Sentry and Not On Our Watch, and Co-Chair of the Aurora Prize Selection Committee, commended Dr. Catena by stating, “As violence and war continue to threaten people’s spirits and perseverance, it is important to recognize, empower and celebrate people like Dr. Catena who are selflessly helping others to not only survive, but thrive. Dr. Catena is a role model to us all, and yet another example of people on the ground truly making a difference.”

For the last nine years, Dr. Catena – known by locals as “Dr. Tom” – has been on-call 24 hours a day, seven days a week at the Mother of Mercy Catholic Hospital to care for the more than 750,000 citizens of Nuba amidst ongoing civil war between the Government of Sudan and the Sudanese People’s Liberation Movement. Patients have been known to walk for up to seven days to receive treatment for injuries from bombing attacks, and ailments ranging from leprosy and tuberculosis, to bone fractures to malnourishment and malaria. It is estimated that Dr. Catena treats 500 patients per day and performs more than one thousand operations each year.

On being named the 2017 Aurora Prize Laureate, Dr. Catena said, “We all have an obligation to look after our brothers and sisters. It is possible that every single person can make a contribution, and to recognize that shared humanity can lead to a brighter future. I draw my inspiration from the Nuba people. And with my faith as my guide, I am honored to continue to serve the world and make it a better place.”

“Dr. Catena is an inspiration to anyone who has ever doubted humanity. Despite tremendous injustice and sacrifice, he has dedicated his life to ensuring that the next generation has a brighter future,” said Vartan Gregorian, President of the Carnegie Corporation of New York, co-founder of the Aurora Humanitarian Initiative (AHI), and Aurora Prize Selection Committee member. “His service to others is an inspiration, and it is our hope that the individuals he has saved will continue the cycle of gratitude by becoming saviors themselves.”

Dr. Catena was congratulated by Marguerite Barankitse, who was awarded the inaugural Aurora Prize in 2016 for her tireless commitment to restoring children’s dignity and hope as the founder of Maison Shalom and the REMA Hospital in Burundi. She said, “The Aurora Prize is so important to keeping hope alive for people around the world, and I am proud to be joined by such a humble and true role model as Dr. Catena. I applaud his selfless efforts in delivering love to all and congratulate him on this esteemed award.”

Guests of the Aurora Prize Ceremony also honored the exceptional contributions of the other four 2017 Aurora Prize finalists: Ms. Fartuun Adan and Ms. Ilwad Elman, the Founders of the Elman Peace and Human Rights Centre in Somalia; Ms. Jamila Afghani, the Chairperson of the Noor Educational and Capacity Development Organization in Afghanistan; Mr. Muhammad Darwish, a medical doctor at the Madaya Field Hospital in Syria; and Dr. Denis Mukwege, a gynecological surgeon and Founder of the Panzi Hospital in the Democratic Republic of Congo.

“Dr. Catena embodies the spirit of the Aurora Prize, and we extend our deepest gratitude to him and the people and organizations around the world that support and inspire him to continue his noble work despite immensely challenging conditions,” said Ruben Vardanyan, co-founder of AHI and United World College at Dilijan. “We are honored to share his story with the world to shed light on the goodwill that exists in the world so that helping others becomes part of our global culture.”

The naming of the 2017 Aurora Prize Laureate follows the release of the Aurora Humanitarian Index, the second annual global public opinion survey that gauges attitudes towards humanitarian responsibility, the effectiveness of humanitarian intervention and individuals’ motivations to intervene on behalf of others. The Index found that support for humanitarian action is on a steep decline, and that a rise in populism around the world is affecting the public’s perception of efforts made to aid refugees around the world. 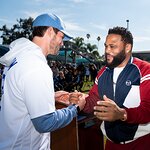