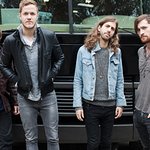 Earlier this week, The Trevor Project hosted its 2017 TrevorLIVE New York gala at the Marriott Marquis in Times Square.

During the event, Imagine Dragons, who played stripped down versions of their hits including “Radioactive” and new singles “Believer” and “Whatever It Takes”, announced a new music festival called “Love Loud” that will take place August 26 in Provo, Utah to support LGBTQ charities including The Trevor Project.

Additional highlights from the event included:

Broadway star Shoshana Bean and Jeremy Jordan opened the show in true Broadway fashion with a choreographed original musical number “I Wish I Were Gay”.

Host John Oliver led the evening by praising the LGBTQ community for standing up for each other saying, “What inspires me most about pride, is although the civil rights of the LGBTQ community are so consistently under siege, its members remain accepting, inclusive, and open-hearted. The Trevor Project represents the spirit of showing up for each other. It stands for love and trust and hope and support and honesty and belonging.”

Neon Trees lead singer Tyler Glenn presented the Hero Award to Imagine Dragons lead singer and good friend Dan Reynolds, who gave a heartfelt acceptance speech giving insight into his upbringing and his internal fight with his Mormon religion. “I always had a hard time with faith,” said Reynolds. “As I got older it came time for Mormons to go on a mission. I decided for those two years I was going to 100% put my heart into it. I knocked on thousands of doors. For those 2 years when people asked me what the doctrine was and they said, ‘Hey I’m gay,” I thought that it was a sin because that’s what I had been raised to teach. I hold regret about that until this day. I wish I could re-knock on those doors and tell them I was wrong. I can’t do that. All I can do is come forward to you today and say I’m sincerely sorry." Reynolds continued to talk about falling in love and finding truth. “I met this girl and I fell in love with her. When I met her, she was living with her two best friends who were lesbians. My wife was my missionary. She taught me what I already knew in my heart, which was that to be gay is beautiful.”