UNHCR, the UN Refugee Agency, has honoured Dr. Evan Atar Adaha (Dr. Atar), a surgeon from South Sudan, with the 2018 Nansen Refugee Award at a ceremony in Geneva.

Dr. Atar received the award for his outstanding 20-year commitment in providing medical services to people forced to flee conflict and persecution in Sudan and South Sudan, as well as to the communities that welcome them.

Presenting the award in Geneva’s Bâtiment des Forces Motrices, Filippo Grandi, UN High Commissioner for Refugees, said he could think of “three or four reasons” why Dr. Atar was chosen to receive the award.

He said most of his patients were refugees and he had lived through displacement himself, after fighting forced him to close his first hospital in Kurmuk, Sudan. In addition, he embodied “not only solidarity, but courageous solidarity” with his refugee patients, “two commodities that are very scarce in today’s world”.

High Commissioner Grandi noted that that the South Sudanese government had just signed a revitalized peace agreement adding: “I have a message for the leadership of South Sudan … one of your compatriots shows the way.”

“The award tonight marks a great humanitarian achievement,” she said. “It is a formalised way of saying ‘thank you’ to one person specifically, but more importantly, it carries with it the inexpressible thanks to all who work in the humanitarian fields — often at great personal cost.”

She added: “Hope is embodied by the field workers and volunteers, like our Nansen laureate tonight. People who bring refugees and host communities together. In these people we have not just the ground force, but the beating heart and moral impulse to achieve change.”

Blanchett concluded: “People like Dr. Atar inspire us to build a better future for everybody.”

Dr. Atar is based in Bunj, in north-eastern South Sudan, where he runs the only functional hospital, serving more than 200,000 people. These include 144,000 refugees from Sudan’s Blue Nile State and the local Maban County population of about 53,000.

His team at Maban Hospital carries out an average of 58 operations per week in difficult conditions with limited supplies and equipment. There is no provision for general anesthaesia, meaning doctors work with ketamine injections and spinal epidurals.

The only x-ray machine is broken, the only surgical theatre is lit by a single light, and electricity is provided by generators that often break down. Since it is the only hospital in Upper Nile State, it is often crowded with patients and wards extend into the open air.

UNHCR currently only has 15 per cent of the money requested to deal with this emergency and provides funding for Dr. Atar’s work through its partner organisation, Samaritan’s Purse (SP).

UNHCR and SP have been working together since 2012 to provide health services at Maban Hospital in the absence of functioning national services. Since it opened, the hospital has been upgraded every year since 2012, but more improvements are needed.

In his acceptance speech, Dr. Atar said he was humble to receive the prestigious award but added: “However, this award is not for me as an individual. The award is for my team back in Maban.”

“The world has to continue searching for peace so that we have a better place for all of us to live, and in harmony.”

The ceremony was hosted by South African actress Nomzamo Mbatha, an advocate for UNHCR’s LuQuLuQu campaign.

Mbatha opened the evening by noting that the award honoured “an extraordinary commitment to humanity”, adding: "This is why we are here tonight — to honour the 2018 winner of UNHCR’s Nansen Refugee Award and celebrate his unwavering dedication to refugees.

The British television presenter and broadcaster, Anita Rani, hosted a live stream of the ceremony on Facebook.

For more than 60 years, the Nansen Refugee Award has recognized those who have shown outstanding dedication to the refugee and stateless cause.

The Nansen Refugee Award alumnae include famous names as well as unsung heroes. Eleanor Roosevelt, Graça Machel and Luciano Pavarotti are among its laureates, but also remarkable but unsung heroes, such as Dr.Atar, who have dedicated themselves to working for the forcibly displaced. 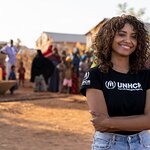