On May 7th, 1,000 guests rallied at United Way of New York City’s 26th Annual Gridiron Gala hosted by CBS’s Otis Livingston and former NFL player Rashad Jennings — in partnership with the New York Giants and New York Jets — celebrating the impact made and looking ahead to continued collaboration, helping low-income New Yorkers move along the path toward self-sufficiency.

“Since the inception of the Gridiron Gala more than $30 million have been raised in support of United Way of New York City’s initiatives in education, health, and financial stability for NYC children and families,” said Sheena Wright, President & CEO of United Way of New York City. “Teaming up with the New York Giants and New York Jets showcases how critical teamwork is in helping low-income families achieve self-sufficiency, and we are so grateful for their continued partnership!”

“It’s humbling and an honor to receive an award from United Way of New York City”, said Giants honoree Michael Thomas. “Helping our youth realize their strengths in academics and our communities is a passion of mine, and partnering with United Way’s Character Playbook program has been a great resource to get this accomplished.”

“Organizations like United Way of New York City have created programs and opportunities within our community that help us to make a difference in the lives of others,” said New York Jets Linebacker Avery Williamson. “By utilizing our platform as football players, we have the ability to work together and support children and families in the area who are struggling with day-to-day financial instability. I feel honored to be given the opportunity to share my commitment to the community and work with United Way to fulfill these initiatives.”

For more than 40 years United Way and the NFL have worked together to strengthen communities—the Gridiron Gala here in NYC serves as the celebration of this incredible partnership. 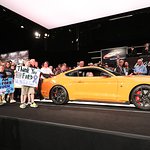 Barrett-Jackson was the epicenter for raising much-needed funds and awareness on behalf of deserving charities nationwide at its 48th Annual Scottsdale Auction, January 12-20, 2019, at WestWorld of Scottsdale. More →