In the video, Sasha Colby commented on recent attacks on drag performers across the country: “Performers like us are being threatened with anti-LGBTQ bills, nasty protests, and even violence. You know what’s scary? People with guns, not queens with books!” In 2022, GLAAD found over 140 incidents of anti-LGBTQ protests and threats targeting drag events, including events run by the organization Drag Story Hour.

The 34th Annual GLAAD Media Awards nominees were published, released, or broadcast between January 1 and December 31, 2022. The GLAAD Media Awards ceremonies, which fund GLAAD’s work to accelerate LGBTQ acceptance, will be held in Los Angeles at the Beverly Hilton on Thursday, March 30, 2023 and in New York City at the Hilton Midtown on Saturday, May 13, 2023.

“With violence, harmful legislation, false rhetoric and other attacks on the LGBTQ community continuing to escalate, it’s more crucial than ever that our community remains visible and included in the stories that the world sees in film, television, music, journalism, and other forms of media,” said GLAAD President & CEO Sarah Kate Ellis. “This year we have more nominees than ever before to represent immensely impactful projects that entertain, educate, and grow acceptance of LGBTQ people. From new stories that debunk lies about transgender youth to kids and family programming which allows all families to be represented, this year’s nominated media images are beloved by audiences and are creating real change.”

GLAAD’s Barbara Gittings Award for Excellence in LGBTQ Media honors a pioneering individual, group, or community media outlet that has made a significant contribution to the development of LGBTQ media. The award is named after Barbara Gittings in recognition of her groundbreaking work as editor of The Ladder, and for her appearances as an out lesbian on national news media throughout the 1970s and 1980s.

This year, The Barbara Gittings Award for Excellence in LGBTQ Media will be presented to The Los Angeles Blade and Washington Blade. Washington Blade is the nation’s oldest LGBTQ newspaper, founded in 1969 just after the Stonewall Rebellion and is the only queer outlet with a dedicated seat in the White House briefing room and the only such outlet that is a member of the presidential pool rotation and the White House Correspondents Association. 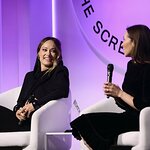 Last week, WIF (Women In Film, Los Angeles) celebrated outstanding women who are laying the foundation to transform Hollywood for the better, with the 2022 WIF Honors Celebrating Women “Forging Forward” in Entertainment supported by sponsor Max Mara for the 19th year, alongside Visionary Partners ShivHans Pictures and Lexus and Major Partner STARZ. More →