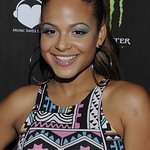 The Palomita Education Fund has announced that R&B and pop singer-actress Christina Milian will be participating in its upcoming charity event, Piensa Mas Alla…Think Beyond, on May 29, 2009 at Terra SF in San Francisco.

Milian has designed and autographed a unique, special edition t-shirt, which will be auctioned at the event, with all proceeds benefitting Latino education at a night that will celebrate fashion, art and Latino culture. The design will also be available for purchase, for a limited time only, through specialty retailers and on-line at palomitaclothing.com. Milian’s latest efforts to support youth education reflect her dedication to making a difference in improving the lives of others. Often recognized as a role model to teens, she has worked with the Children Uniting Nations charity as a big sister to foster children and was recognized with a humanitarian award at The Reign music awards from the Elton John AIDS Foundation for her work as a role model to young children. She has also started to write two books targeted toward teenage girls that exemplify healthy ways of finding happiness.

Drawing on last year’s success, the second annual Piensa Mas Alla…Think Beyond… event is expected to draw over 500 VIP’s of the Latino community together in celebration and support of fashion, art and Latino culture. Other confirmed celebrity designers include Rosario Dawson, Eva Longoria, Andy Garcia, Tony Romo, Jaslene Gonzalez, Maria Conchita Alonso, Melonie Diaz, Cesar Millan, Walter Perez, and Valerie Cruz. This is a great way to kick-off the summer and enjoy a luxurious evening while supporting a worthwhile cause. A limited number of tickets for the event are available on www.palomitaclothing.com/events.

Born to Cuban parents, Christina Milian is an American R&B and pop singer-songwriter, dancer, and actress. Her first professional musical appearance performing vocals with rapper Ja Rule on the song “Between Me and You” peaked at number 11 on the Billboard Hot 100. She also co-wrote and performed backing vocals for Jennifer Lopez’s album “J.Lo” in the “Play” track. She released her first album in 2004, which included the single “Dip It Low,” that became Milian’s biggest hit to date, reaching number two in the UK and number five in the U.S. and also earned her a Grammy Award nomination for “Best Rap/Song collaboration.” Her non-musical projects include starring roles in films such as Be Cool with John Travolta and Uma Thurman, and she also recorded two songs for its soundtrack.

The Palomita Education Fund was founded in 2007 by Molly Robbins, a successful entrepreneur and Mexico City native. It is a non-profit organization that encourages and supports education, professional and leadership development in the Latino community. The objectives of the organization are: to provide scholarships to Latinos planning to enroll in college, encourage participation of the Latino community in higher education, and professional growth and promote a productive and high-quality life.