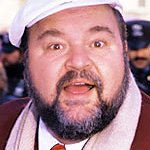 Actor Dom DeLuise sadly passed away on Monday, May 4, after a long battle with cancer. But the comedian is leaving a lasting legacy for charity.

In lieu of flowers, DeLuise’s family has asked for donations to some of his favorite charities, such as the Elixir Fund, the Lily Sanctuary, the Hydrocephalus Foundation, and the Pearl S. Buck Foundation.

DeLuise is also one of the stars who has donated doodles to this year’s annual Celebrity Doodle auction to raise money for Neurofibromatosis, Inc..

Imagine an unpredictable disease that causes tumors to form on the nerves of your body. Depending on their location, these tumors can cause disfigurement, dysfunction, deafness or blindness. In the wrong place they can be fatal. That is Neurofibromatosis, or NF for short. If that weren’t enough, NF can also cause learning disabilities, seizures, bone deformity and cancer. Currently, 100,000 Americans have NF; worldwide, 115 babies are born each day with this same genetic disorder.

Neurofibromatosis can affect any family. Half the children born with it have no family history of NF. Despite the many researchers studying this devastating condition, there is still no cure, and treatments are largely inadequate.

But there is hope. In support of its mission, NF, Inc., the national non-profit organization dedicated to serving families affected by NF, announces its third annual National Doodle Day fundraiser, an auction of “Doodles” by a wide range of celebrities and artists. Each contributor has donated and autographed a one-of-a-kind work of art drawn on a 5 × 8 Doodle Card. Beginning Thursday, May 7, these Doodles will be auctioned on eBay, with all funds raised supporting NF, Inc.

Last year’s auction raised $28,000 for NF, Inc. The top seller, at $2,749, was a Doodle by X-Files actress Gillian Anderson. The premiere auction in 2007 featured a Doodle by the junior senator from Illinois, now President Barack Obama! It sold for $2,075.