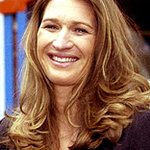 Despite the rain, both the children and the two champions were enthusiastic. At the end of the session, Longines – for which the two tennis legends are Ambassadors of Elegance – donated US$ 80,000 to their two charity foundations – the Andre Agassi Charitable Foundation and Children For Tomorrow.

This was followed by a splendid gala evening at the Pavillon Cambon Capucines. Between the gastronomical dinner prepared by one of Switzerland’s leading chefs and the musical entertainment provided by the singer Arielle Dombasle, two timepieces specially created by Longines to mark the occasion were auctioned off and, with the money raised in the morning, made the grand sum of $US220,000, which will be entirely donated to the two former tennis champions’ charity organizations.

Stefanie Graf and Andre Agassi were invited to Roland Garros by Longines to mark the 10th anniversary of their singles victories at the legendary Paris tournament and have once again shown their commitment to children in need.

Starlight Children's Foundation announces its first major distribution of 100,000 Starlight Brave Gowns to hundreds of Starlight partner hospitals and healthcare facilities across the country, in partnership with Athletes For Hope whose member athletes will help deliver gowns to pediatric patients throughout the U.S. More →