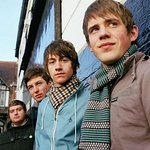 As previously reported, British band the Arctic Monkeys are to release their new single, Cry Lightening, exclusively through Oxfam shops.

The band have now revealed that they have hidden tickets to concerts in two of the singles – Willy Wonka style.

The “Golden Tickets” are for the Reading and Leeds Festivals to be held on August 28-30, and have been randomly placed in two of the singles. The band has also personally signed 40 of the singles, which will also be hidden in Oxfam shops across the UK. A further 15 signed copies will be sent out at random to customers who buy the record using Oxfam.org.uk/shop.

A ten-inch version of the single is being sold through conventional record shops.