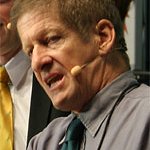 HG Nelson of the wildly popular Australian comedy team Roy and HG won the top bid for his jeans at the Jeans for Genes charity auction in Sydney earlier this month. His pants went for $32,000. Second highest bid was $21,000 for Arnold Schwarzenegger's, third was $16,000 for Michael Caton's, $11,000 for Ashley Judd's, $10,000 for Brigitte Bardot's and $9,000 for David Copperfield's.

Each pair of jeans was signed by the owner and featured painted artwork. The $200,000 raised will go to the Children's Medical Research Institute.

“All money from [this auction] and from August 3 [Jeans for Genes Day] goes to funding research to investigate the causes of childhood diseases and disorders,” spokeswoman Julijana Trifunovic said. “From this research it is hoped better treatments or cures may follow.”

The United Nations is highlighting the important role that population trends play in promoting sustainable development, during the annual Commission on Population and Development, which began at UN Headquarters in New York last week. More →

Almost 40% of people experiencing homelessness in the United States are under 181. One item they commonly request in homeless shelters is a pair of jeans. Why? Jeans are comfortable in any season and can be worn multiple times between washes. Plus, for a teenager without many belongings, wearing a pair of jeans can provide a sense of security. More →
More news →