Nelly Furtado Reads For The Record

Look To The Stars’ Regina Walton attended a very special reading of a classic children’s story and filed this report.

On September 14, singer-songwriter Nelly Furtado went to the Borough of Manhattan Community College (BMCC) Daycare Center as a spokesperson for Jumpstart's Read for the Record campaign. During this event they announced that a limited edition of Eric Carle’s The Very Hungry Caterpillar, which is the Read for the Record official campaign book, will be on sale at WalMart stores nationwide.

Read for the Record will take place on October 8, 2009. The goal is to break the world record as adults read the same book on the same day to more than one million children across the USA. Another goal of the campaign is to raise both awareness and funds to support Jumpstart’s work. Jumpstart works with preschool children in low-income communities. The organization is working toward the day when all children enter school prepared to succeed. In addition to Ms. Furtado, the program’s co-sponsors were there. Stacy Morrison, the Editor-in-Chief of Redbook, started off the conference. Also, Michelle Gilliard, Director of the WalMart Foundation, and Raymond Garcia, from the Pearson Foundation spoke.

Nelly talked about her commitment to the Jumpstart program and her commitment to the literacy cause. At the press conference, Nelly talked about her daughter who will turn six in a few days, “…reading has been such a huge part of our lives. I read to her daily when she was a baby. We have a lot of books at home. And, I was shocked to hear that… in some households there might be as little as zero, one, two or three books in low income households all across America. I remember when I was a child my parents saving their hard-earned money and buying us the Childcraft Encyclopedias. They were our whole world and inspired a love of reading. I know that it’s so important to get that language in the children before they even get to kindergarten because then they have the familiarity there. And so, it’s really special to be here because I really love books.”

Nelly echoed the same thoughts in my one-on-one with her. As a mother of a young girl, she realizes that it’s key to set the groundwork for literacy early. Jumpstart’s Read for the Record campaign is a great way to get started and make sure that children start school with the basic skills they need to succeed. For Nelly, the appeal is it’s not intimidating to get started. Anyone can get a book and read to a child. What could be easier?

During the event, Nelly recorded a PSA to promote Jumpstart. However, best of all, a few lucky preschool kids got to enjoy Nelly reading The Very Hungry Caterpillar to them.

To take part in Look To The Stars’ special promotion to win a signed copy of The Very Hungry Caterpillar, click here 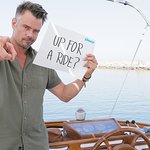 Here’s your chance to go on a boat ride with Josh Duhamel – and all you have to do is donate to charity. More →