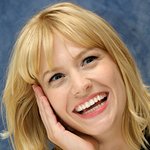 Actress January Jones was in Washington recently on behalf of Oceana's campaign to save the sharks. She was there to lobby Congress members to tighten up US laws that would help regenerate the population of sharks from which 100 million are killed every year.

“The United States needs to stand up for sharks,” said Jones. “Congress can do its part by passing the Shark Conservation Act.”

Existing laws already ban “finning” – where a shark’s fins are cut off and the carcass thrown back into the sea – yet allow for the transfer of fins at sea from countries without restrictions as a way around the ban. However, Oceana is pushing for the requirement that sharks be landed whole, i.e. with fins still naturally attached. They also want to decrease the demand for shark products and reduce unintended shark catch.

According to Oceana, sharks are key to maintaining healthy ocean ecosystems by regulating species abundance, distribution and diversity, and providing food sources for scavengers. They’re also critical to the health of other systems. Without them, coral reefs would become algae dominated systems, seagrass beds would decline and chain reactions to these would be set into motion.

As Jones says in a public service announcement: “We should be scared for sharks, not of them.”