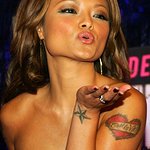 In the span of 12 hours, bidding on Tila’s cast had reached $44,500 with eight days still left in the auction before it ends on November 6. Her cast is featured along with the hosts of E! Entertainment’s That Morning Show and Cristal Camden of The Girls Next Door.

Tila posted on her blog: “I am so excited to be able to work with Keep A Breast Foundation! It’s a great charity that I work with that help raises money for Breast Cancer [Awareness]” Later, twittering non-stop to her fans as her breast cast jumped thousands of dollars as she upped the auction with promises of a personal phone call and kiss for the winner, and matching tweets for dollars to her TilaArmy that she would donate up to $10,000 for people to tweet about the Keep A Breast Foundation and the auction. As the bidding rose this morning to $44,500 with 8 days left to bid. Tila wrote on her twitter “Wow! I just checked and now my boobies are at $44,500.00!! Incredible!!! I’m gonna cry of joy! xox”

Look To The Stars reported on a similar initiative organized by the charity last year featuring Katy Perry. Perry breast cast raised $3,500 for the cause

Proceeds from the breast casts, which were painted by artists Mike Maxwell, Caia Koopman, Carly Ealey, Brant Sandor and Randy Janson, will benefit the Keep A Breast Foundation’s mission of raising awareness amongst young teens and adults across the nation about prevention and early detection.  We would be happy to provide photos of the celebrities during the casting process along with the finished products. The auction will be live until November 6 at www.keep-a-breast.org.