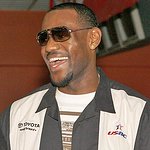 On the season finale of the HBO hit show ‘Entourage’, NBA star LeBron James appeared as himself alongside Matt Damon as they hounded Vinnie (played by Adrian Grenier) to donate to Damon’s ONEXONE Foundation. During the last few minutes of the show, LeBron told Vinnie that he donated “$1 million” to the foundation.

But did he really?

Now, after months of speculation, LeBron James has confirmed that he did, in fact, donate one million to ONEXONE. When asked if the donation he mentioned on Entourage “was real,” LeBron said “Of course it’s real.”