Look To The Stars Talks to Kim Stolz 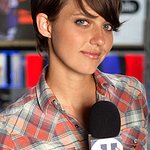 In recognition of December 1st as World AIDS Day, LookToTheStars.org correspondent Regina Walton spoke to Kim Stolz about her work with the Staying Alive Foundation.

Kim Stolz is an alumna of Americas Next Top Model (ANTM), Season 5, and since then has made a name for herself as an mtvU VJ and MTV News correspondent.

Kim graciously took time out to talk with us about causes that are meaningful for her and her charity work.

In the approach to World AIDS Day, I started off with questions about MTV’s Staying Alive Foundation. Staying Alive is a global grant-making organization. Its goal is to encourage, energize, and empower young people who are involved in HIV/AIDS awareness, education and prevention campaigns. On December 1st, World AIDS Day, Staying Alive Foundation will release a single by Travis McCoy titled, One at a Time. The single is available on iTunes and the goal is to raise $100,000 for the foundation.

The event that kicked off this campaign is where I met Kim.

When asked how long she’s worked with the Staying Alive Foundation and what got her involved with that cause, she answered, "I’ve worked sort of with different charity organizations and non-profits that MTV is involved with [like] Think and Staying Alive… I got involved because Paul Dien, who is a fantastic guy at MTV, talked to me about six months ago about Staying Alive. … He actually thought of me when they were doing this event, and asked me to host it. Travis McCoy is a friend of mine, so it just fit really perfectly."

When asked why Staying Alive was important to her, and what distinguished it from other causes, she answered at length:

“What is so important to me about Staying Alive and about the Glaser Foundation (the Elizabeth Glaser Pediatric AIDS Foundation), which is completely separate (from Staying Alive)…Nigel Barker, who I know from ANTM, has just done a fantastic project with the Glaser Foundation. … It’s basically pre-natal care as well as testing for the mother, testing for the children and post-natal treatment to ensure that babies are no longer passed HIV by their (infected) mothers because that is a really huge problem. Through their work they’ve actually been able to decrease it by 94%, which is an incredible, incredible number. I actually knew about that first, so when I heard about Staying Alive I was like ‘you know what? This relates. I’m interested in this.’

[It’s] not necessarily for the LGBT tie-in, because I hate when people tie in HIV/AIDS with gays. I think it’s a really unfortunate and bad stigmatic tie-in to make because it really has nothing to do with it but that used to be a huge problem. In the early 90s there was still that sort of stigmatic tie-in. I came out [at that time] and … not knowing much about it, it was something that I wanted to get involved in from a very young age. Through being involved I realized that it isn’t really gay people that are so much affected but it is people from other parts of the world. …

Working with kids with HIV is something that, I think, is one of the most important and also, most left out, things we need to be doing. I can’t believe how many kids are ignored and stigmatized because they have HIV. I don’t know why we’ve not paid more attention to this. But through Staying Alive and through Nigel Barker’s work with the Elizabeth Glaser, we’ve been able to really work a lot more with these children.

What I love about Staying Alive is that it is kids, teenagers and early-20-somethings are … getting grants and working in their communities to combat HIV and AIDS. I think there is something so wonderfully fitting about someone your age helping someone else of the same age. … There is something a lot more meaningful and a lot more driven about an 18 year old going help a bunch of teenagers in a small HIV-ridden community in sub-Saharan Africa.

Though Kim focusses much of her energy on getting more people involved in AIDS awareness, there are also many other ways she shows her support for good causes:

The 26 year old also blogs for the Huffington Post, Fox Forum, and True Slant, and is a regular political commentator. On top of all of that she’s signed with Ford Models’ celebrity division.

In addition, Kim wants to attend law school and she’s currently gearing up to write a book on the impact of Web 2.0 on today’s society. She’s got a lot of drive and ambition!

To find out more about how you can support Kim’s work with the Staying Alive Foundation, visit staying-alive.org, and remember to download Travis McCoy’s track, One at a Time.

Look to the Stars would like to thank Kim for taking the time to talk with us, and we look forward to bringing you more news about her future charity work!