Bono And Didier Drogba Lace Up To Save Lives 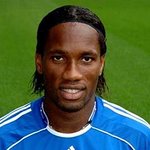 On the eve of World AIDS Day, Chelsea’s Didier Drogba turned RED as he teamed up with U2 front man Bono and Nike to launch the ’Lace Up. Save Lives" initiative to fight HIV and AIDS.

With Drogba on board, Nike announced it’s partnership with (RED) and is selling special red laces under the banner “Lace Up. Save Lives,” with the proceeds to be split equally between the Global Fund and soccer-based community programs aimed at educating people about AIDS.

“It was important to me to be involved in the Red campaign because I’m from Africa,” Ivory Coast international Drogba told a news conference in London. “It’s a big honor and pleasure for me to be linked with Bono and try to help him save some lives. AIDS and HIV is something that really destroyed Africa, and people don’t really realize how easy it is to save lives — only two pills a day, which is 40 cents.”

Drogba had a sensational week, scoring twice as his Premier League leaders Chelsea beat London rivals Arsenal 3-0 on Sunday, and Drogba credits his goals to the “red laces” he was wearing for the game.

“I think the red laces really helped me, especially for the free kick. I was really proud to have a chance to show the laces and after the game people were calling me: ‘Why were you wearing red laces?’ and I had to explain to them.”

The laces are now available here.

The auction features work from artists who participated in the PAINT (RED) SAVE LIVES global art campaign earlier this year, which saw an army of over 30 artists supporting (RED) and the AIDS fight by creating extraordinary, unique murals and installations in more than 20 cities from New York to Nairobi. More →