State Radio Is Calling All Crows For Charity 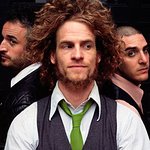 State Radio frontman and former Dispatch member Chad Stokes took to the stage with “Some Good Friends” this past weekend at Arts at the Armory in Somerville, MA for the second annual Calling All Crows benefit shows.

These shows wove together music with a message, celebrating the accomplishments of Calling All Crows’ first year in action, including 600 fans volunteering over 3,000 hours at local service projects across the country and a year long effort from State Radio and their fans to raise $100,000 for Oxfam America’s Darfur Stoves project. The Calling All Crows team (pictured above) presented the check on Saturday night, December 12, to Bog Ferguson of Oxfam America.

“Oxfam America’s partnership with State Radio and Calling All Crows on our Darfur Stoves project has been meaningful from day one,” Ferguson remarked. “Like Oxfam, the band and their organization are all about creating partners and activists to help make our globe a better place. Their work on this project will impact 5000 families in Darfur for the better, and proves the motto of Oxfam America’s concert outreach program that ‘music can change the world.’”

The donation will provide 5,000 fuel-efficient stoves that will decrease the number of trips Sudanese women need to make away from their refugee camps to collect firewood and, in turn, decrease their risk of becoming victims of rape and assault.

Stokes, co-founded Calling All Crows last year with his long-time partner and tour manager Sybil Gallagher. A service organization dedicated to mobilizing musicians and their fans to promote human rights, Calling All Crows has developed a unique engagement model, empowering musicians, fans, and service partners to serve side-by-side to create change. Globally, the organization seeks to end violence against women through humanitarian relief. Locally, they aim to inspire public service through hands-on volunteerism.

The 2nd Annual Calling All Crows Benefit Weekend consisted of unique performances, community service and special announcements. Friday evening (Dec 11) featured performances from Stokes, fellow Dispatch bandmate Pete Francis, with Jay Driscoll of Barefoot Truth on weissenborn slide guitar, Matt Embree of Rx Bandits, and State Radio’s Michael “Maddog” Najarian, who traded his usual drum kit for acoustic guitar. The artists came together at the end of the night for a cover of The Band’s “Ophelia.”

Artists and fans joined AmeriCorps members with City Year Boston early on Saturday (Dec 12) morning for a transformative day of service at Bridge Over Troubled Waters, a home for runaway and homeless youth. That evening at the Armory included the return of Embree, who opened his soulful “Overcome” with a tip of the hat to Stokes with a tease of State Radio’s “Camilo.” Saturday’s bill also featured sets by The White Buffalo and Stephen Kellogg, culminating in an encore featuring the entire lineup on Jim Croce’s “Bad, Bad LeRoy Brown” and The Band’s “Up On Cripple Creek.”

Saturday evening, Calling All Crows also announced its plans for 2010, including a goal of 10,000 service hours, pre-show service projects on State Radio’s European Tour in March, and a unique service trip for a select group of fans. Calling All Crows’ inaugural Alternative Spring Break Tour will host 10 fans on a week-long bus tour through Texas and Louisiana with service projects during the day and shows every night. Next year’s humanitarian fundraising commitment will be announced when State Radio kicks off their Winter Tour on January 14th in Tucson, AZ.