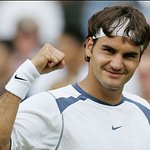 The Roger Federer Foundation spends approximately $1 million a year on education in Ethiopia, South Africa, Tanzania, Mali, Malawi and Zimbabwe, so it’s no surprise that this week we find the Grand Slam champion visiting a school in Ethiopia where he received a hero’s welcome.

“My Mum being from South Africa is obviously the inspiration behind the foundation,” Roger Federer said, “I went there on vacation a lot when I was younger. So we started with a project in South Africa and, as I got older and got more money, I wanted to expand…when I arrived at the school and all of the children were singing, it was very emotional,” Federer told Reuters. “They sang, `Roger, our Father’ to me. I didn’t really understand it at the beginning but I still had tears in my eyes.”

Federer is hopeful that his seven-month old twin girls, Myla and Charlene, will grow up to appreciate the world around them: “I definitely want to show them that this world exists as well,” Federer said, gesturing at the tin-roofed classrooms around him, “There’s no way around it for them because I’ll be traveling. It will be a very exciting ten years for me because I’ll be trying to educate and help them and show them all these things.”

During his visit, the owner of 16 grand slam titles accepted a challenge to run against the school’s best athletes in a 1km fun run. Federer was quickly humbled as the Ethiopian children overtook him en masse.

“I’ve always had massive respect for long distance sports,” he said. “The terrain was so dangerous and they ran barefoot. It was impressive to say the least.”