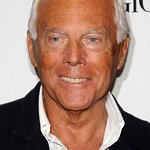 The show ended with a flashing light display in which 30 models took to the runway in nude briefs, showcasing the new Emporio Armani/Reebok sneaker collection.

The show took place just a few weeks after he showcased his autumn/winter designs at Milan Fashion Week.