The YouTube channel dedicated to The Global Fund's Born HIV Free campaign, which was launched seven weeks ago, has already been seen by more than 11 million viewers. The channel features an exceptional animation film called “Baby in the Sky”, created by the design team Les Bonzoms and with music of Amy Winehouse.

“Baby in the Sky” is a highly creative and imaginative animated film that conveys the beauty of life ahead for an unborn child. The film artistically portrays an imaginary journey in a world full of adventurous landscapes and fantastic creatures. It ends with a call from Carla Bruni-Sarkozy for an HIV-free generation in which she says “Life is a beautiful journey. Don’t let AIDS kill it.”

The film owes its powerful soundtrack to multi-award winning and singer/songwriter artist Amy Winehouse, who offered the pro-bono use of her “Back to Black” song for the film.

“It was a question of finding a true resonance with the images in the film created by Bonzoms”, says musician / producer Julien Civange, who conceived the Born HIV Free campaign, about the use of Winehouse’s music. “We wanted to find a piece that was modern but also well known, something that carried the same sensibility as the film. The magic came with the soundtrack by Amy Winehouse, an artist that Carla considers one of the greatest and most talented of her generation and who was generous enough to participate in the campaign.”

The animation can be viewed on the Born HIV Free YouTube channel and will also be distributed through various social and mass media platforms during the course of the campaign.

Since June 20, Euronews, the international news channel, has been broadcasting “Baby in the Sky” on its network in 155 countries. The film is shown in 90-second slots an average of three times a day for the first month and then once a day thereafter. Broadcasting of the film will continue until 5 October 2010.

“All of us at Euronews are very proud to be associated with this initiative, which is supported by an incredible positive animated film” said Philippe Cayla, Chairman of the Executive Board of Euronews. “We are glad to open Euronews’ influential and far-reaching network to such professionals and experts fighting to eradicate HIV transmission during pregnancy. We are mobilized to make a success of this campaign and we strongly believe that Euronews’ viewers will be deeply moved and will want to participate in the Born HIV Free campaign,” Mr Cayla added.

CNBC has also been broadcasting the video on its network in Europe, Middle East and Africa since the launch of the campaign.

Speaking about the distinctive nature of the “Baby in the Sky” project, Jack-Antoine Charlot, a designer from Les Bonzoms said: “It was necessary to stop playing with the notion of guilt as an incentive for people to act and instead to reinforce a sense of wanting to share and take part in something. In the case of mother-to-child HIV transmission, the medications already exist to stop it. The problem is one of mobilization.”

After the film, viewers are invited to show their support by signing their name on the campaign’s “virtual wall of support”, on the www.bornhivfree.org website. The campaign asks people – by the simple act of clicking a button – to register their support for the work of The Global Fund and for the elimination of mother to child transmission of HIV by 2015. 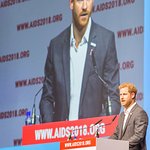 bioLytical Laboratories, a world leader in rapid infectious disease tests and developer of the 1 minute INSTI HIV Self Test, commends Sir Elton John and Prince Harry, Duke of Sussex for the launch of the MenStar Coalition to engage men in new and innovative ways to break the cycle of HIV transmission. More →