Avatar director James Cameron has announced that his next film could be a documentary about the Brazilian rain forest tribe he visited earlier this year, and their fight against the proposed hydroelectric dam that could flood them out.

Cameron and Avatar stars Sigourney Weaver, Joel David Moore, and wife Suzy Amis Cameron were in Brazil in April to raise worldwide awareness about Brazilian indigenous communities’ battle to stop the massive Belo Monte Dam on the Xingu River in the Amazon rainforest.

“There are many logical arguments against this dam,” wrote Cameron in a letter to President Luis Inácio Lula da Silva at the time. “The Belo Monte dam will inundate over 500 square km of land, and divert nearly the entire flow of the Xingu through two artificial canals to the dam’s powerhouse. This alone will leave Indigenous and traditional communities along a 100 km stretch of the Volta Grande without water, fish, or a means of river transport. The lowering of the water table would destroy the agricultural production of the region, affecting Indigenous and non-Indigenous farmers, as well as water quality.”

The director has now told the Folha de Sao Palo newspaper that he wants to work on a documentary about the affects of the dam, and the importance of the rain forest to those who live there.

“I want to return to meet some of the leaders in the Xikrin-Kayapo tribe who invited me,” he said. "I want to take a 3-D camera to film how they live, their culture. When I was asked to help the Brazilian Indians, who were desperate, I could not turn away. I’m sort of weighing this constellation of really cool things that I want to do. I do want to do another ‘Avatar’ film, probably two, and I’m talking to Fox about that right now.
“There’s a strong possibility that I might insert one of these other movies in between before that. It’s all up in the air right now.” 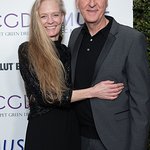