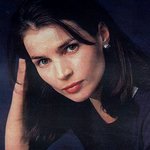 Julia Ormond is the Founder and President of the Alliance to Stop Slavery and End Trafficking (ASSET), which works with corporations, NGOs, government officials, and individuals to create the systemic change needed to eradicate slavery at source.

ASSET was a chief organizational sponsor of California Senate Bill 657, the CA Transparency in Supply Chains Act of 2010, which was signed by the Governor today.

Ormond stated “I am deeply grateful to Senator Steinberg for introducing this bill, and to Governor Schwarzenegger for signing this important piece of legislation. By signing the bill, the Governor has confirmed that California will continue to lead the country incombating slavery and human trafficking. Business has a crucial role to play in ensuring that slave labor and human trafficking do not infect the products we buy. The California Transparency in Supply Chains Act of 2010 recognizes the role that business can play, and also enables consumers and investors to make informed purchasing and investment decisions.”

This bill would enact the California Transparency in Supply Chains Act of 2010, and would, beginning January 1, 2012, require retail sellers and manufacturers doing business in the state to disclose their efforts to eradicate slavery and human trafficking from their direct supply chains for tangible goods offered for sale.