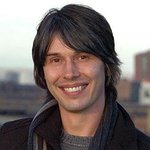 Although Adams died unexpectedly in 2001 at the age of 49, the Memorial Lectures – held every year since 2003 – continue to explore the themes in which he was so interested, and help support both Save the Rhino International and the Environmental Investigation Agency, two charities championed by the “Hitchhiker’s Guide to the Galaxy” author.

Douglas was moved to take action for wildlife conservation during a 1985 visit to Madagascar. His dedication to the cause resulted in the book “Last Chance to See” highlighting the plight of species facing extinction.

was later turned into a documentary series featuring Stephen Fry and BBC Zoologist Mark Carwardine. Carwardine spoke about his encounters with rhinos at a Save the Rhino event early this year.

“I’ve learnt so much about the way the community works together. It’s not only about rhinos, it’s a holistic approach, making a whole area work for people and for rhinos. I’ve met the community leaders and visited the farming projects and I am so impressed,” she told fellow patron, Simon Barnes.

“It has been great to visit this project and see that people are really starting to get it. It’s about sustainable coexistence. And it’s doable.”

Douglas Adams’ books often explored the interconnection of all things, and in the Hitchiker series he took us out into the universe to explore our connections with other worlds. It seems fitting, then, that Professor Brian Cox has chosen to speak at the lecture about “The Solar System and Why We Should Explore It.”

To learn more about how you can support Save the Rhino’s environmental work, visit www.savetherhino.org/.