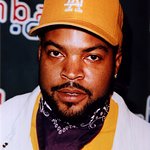 RareInk.com have announced a partnership with hip hop icon Ice Cube with the unveiling of a series of original artwork in collaboration with RareInk– a charity-focused company delivering music fans original, authentic autographed art of their favorite recording artists created in conjunction with RareInk’s collective of fine artists from around the world.

“Expanding the interaction with fans of my music by offering limited edition, signed artwork that they are able to share and enjoy with their friends and family is something I feel my fans deserve,” said Ice Cube, who in addition to being the RareInk’s first artist will serve as the company’s strategic advisor. “With RareInk, music fans now have an online destination for unique, autographed art that they know is real. Not only does RareInk create amazing pieces of art that bring my albums and songs to life but a portion of the proceeds will benefit the Minority AIDS Project, a cause that is very important to me.”

Ice Cube’s first series of artwork will be released on Wednesday, June 22nd at 10:00 A.M. PDT; it is comprised of nine pieces available in limited edition runs of seventy-five to two hundred and fifty. The editions will be sold exclusively on RareInk.com and feature fine art quality prints of iconic photography, album covers, and original pieces. Highlights include original artist reinterpretations of Ice Cube’s classic ’Amerikkka’s Most Wanted’ and ‘The Predator’ album covers as well as a mural- themed piece based on his classic ‘It Was A Good Day’ video. Each piece is hand signed by Ice Cube, with two of the editions also including his handprint, which he dipped in paint and applied to each print.

Ice Cube’s first RareInk series features original works by artists MiQ Willmott (TWEEQIM), Kerry Laster (Phantom Kay), Mark Sgarbossa, Grzegorz Demoradzki (Gabz), and Leon Bedore (Tes One), as well as a portrait by renowned photographer Patrick Hoelck. The autographed large-scale prints range in size and price, from 24’’ by 24’’ album prints for $300, to the 36’’ by 24’’ Hoelck portrait which features Ice Cube’s handprint at $700. The RareInk website showcases video of Ice Cube signing the pieces and discussing the artwork and albums. The signing and interview footage is also included on a DVD that is packaged with each print. In order to ensure the authenticity of the signature and artwork, each RareInk print is affixed with a uniquely serialized anti-counterfeit label on the back and includes a certificate of authenticity noting the edition number.

“In the music business we take a hit song, sample part of it, and try to make another hit record with it. In the same way, RareInk has taken my albums and turned them into amazing works of stand-alone art. The series is something I’m really proud of and I’m sure other recording artists are going to want to get involved, both for their fans and their charities,” commented Ice Cube.

Music fans can visit RareInk.com to view Ice Cube’s artwork and signing videos leading up to the premiere release of the series on June 22nd in addition to joining RareInk’s FaceBook page to receive exclusive information on soon to be announce collaborations with other musical icons and RareInk. 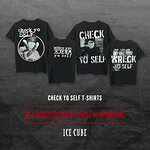 As the country and world continue to come together to fight against COVID-19, Ice Cube announced today the creation of special “Check Yo Self Before You Wreck Yo Self” t-shirts utilizing his famous lyrics as a perfect microcosm for how we all need to act – nobody is immune and we all need to protect each other. More →