Counting Crows' Instruments Fly Out The Door For GreyBirds 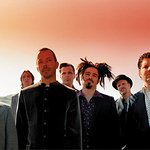 The members of rock band Counting Crows have auctioned off tickets, albums, memorabilia and instruments, raising nearly $20,000 for charity.

The proceeds will benefit the GreyBird Foundation, which grew out of the outreach program the band established in 1998 to encourage and support people to become more helpful in their own neighborhoods. Through GreyBird, the band provides a platform for other outreach groups at Counting Crows concerts. They also ask audience members to bring canned food to the concerts for donation, and encourage people to vote.

“The most patriotic act you can ever do in your life is to vote,” says Duritz.

On an international level, GreyBird works with Kids for Tomorrow, which helps fund and build schools for children in Africa.

The highest bid in the auction – $7600 – was for lead singer Adam Duritz’s handwritten song lyric book. Concert tickets plus dinners with the band were also big sellers.

Ben Mize’s drum is the last Counting Crows item still up for auction, on Ebay until April 21. Proceeds will benefit Nuçi's Space, a center for musicians suffering from depression.

Bob Saget will be honored for his nearly three decades of commitment to the Scleroderma Research Foundation (SRF) at Cool Comedy – Hot Cuisine, the 39th gala to benefit the SRF on Friday, June 16th at the Four Seasons Beverly Wilshire. More →