On Tuesday, September 13, the stars came together at the Carrie Hamilton Theatre in Pasadena to present CONCERT FOR VICTOR: A BENEFIT.

All proceeds from the concert went to 23-year-old Victor Rodriguez and his family. In June 2011, Sacramento newlyweds Victor and Crystal Rodriguez went parasailing on the last day of their honeymoon in the Bahamas. At a height of approximately 200 feet their harness snapped, and they fell into the ocean. Crystal was killed, and Victor suffered severe injuries. Neither of them had health or life insurance. They had only been married 12 days.

Donations to The Rodriguez Family Care Fund can be made online at Melora Hardin’s website, www.melora.com. 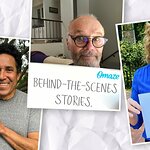