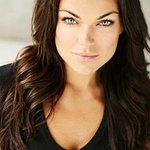 Serinda Swan, star of the A&E drama series Breakout Kings, is calling her recent visit to a Heifer International project in Cambodia “amazing.”

Heifer International is a global nonprofit working to end hunger and poverty and care for the Earth. The adventurous actress traveled to the rural project to see firsthand how livestock and training can set communities on the road to prosperity.

“Being able to go on a trip into the countryside with Heifer International was an amazing experience for me. The work that they do is so diverse and vast it blew me away,” Swan said.

Swan visited villages in the Svay Chrum district, where she saw families whose living conditions have improved through gifts of chickens and pigs from Heifer International. In parts of the world suffering from severe hardship, Heifer empowers families to rise out of poverty and build better futures for themselves.

Swan said she was especially touched to witness a Passing On the Gift ceremony, in which families who have received a Heifer animal pass on its first offspring to another needy family. In this way, each Heifer gift multiplies and provides food and other products to more people.

Swan visited a children’s group where village children learn about responsible living. “They sang and taught me how to play some of their instruments. I may need to come back a few times to master them,” Swan joked. “But their hearts were so big and welcoming, I felt right at home.”

In addition, Swan saw a reading group composed mainly of women. As part of its projects, Heifer conducts training in skills like literacy, community leadership and building small businesses. This education helps make Heifer participants self-reliant long after the project is complete. Swan said it was impressive to see how group members participated and encouraged each other.

“There is so much more Heifer is doing than just supplying people with animals,” Swan said. “It’s wonderful to see.”

Swan is a strong supporter of Heifer International, as a charity that connects her interest in animals with her concern about global poverty. She’s now working to raise awareness of hunger and deprivation back in the United States. Swan says her visit to the Heifer Cambodia project was eye opening and reinforced her respect for Heifer’s sustainable community development.

“I plan on going back next year and visiting everyone again,” Swan said. “I cannot wait to see how far they have come, with the courage and determination that I witnessed.”

To celebrate International Women’s Day on March 8, Heifer International, a global development organization working to end global hunger and poverty by investing in small-scale farmers, along with celebrity ambassador and Emmy award-winning actress, Uzo Aduba, announced the launch of the “Inspiring Gifts for Inspiring Women” campaign, in partnership with eBay for Charity. More →