Stars Turn Out For Ante Up For Autism Poker Tournament

The 5th Annual Ante Up for Autism charity event for TACA (Talk About Curing Autism) was held on Saturday and raised over $250,000 for 28,000 families across the country.

The 5th Annual Ante Up for Autism was held at The St. Regis Resort in Dana Point, CA on Saturday, November 5, 2011. The event included a VIP red carpet entrance, cocktails and hors d’ oeuvres on the resort lawn, a live performance by “One Tree Hill” actress and singer Kate Voegele, tournament poker with tips from poker stars Michelle Lau, David Mosikian and Joe Sebok, a dinner buffet, and a live silent auction supporting “Talk About Curing Autism.” TACA raised more than $250,000 (gross) and more than 300 people attended the event to support over 28,000 families across the United States touched by autism. 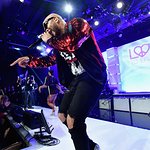