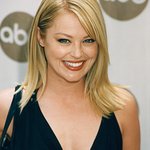 Two-time Emmy-nominated actress and star of Fox’s mega-hit TV series Glee, Charlotte Ross has been recognized by The Humane Society of the United States with its Animal Advocate Award for service to the animal protection cause.

A dedicated and long-standing animal advocate, Charlotte recently bolstered HSUS efforts on Capitol Hill, joining in lobbying for the Great Ape Protection and Cost Savings Act, which would phase out invasive research on chimpanzees in laboratories.

“Charlotte is a true advocate, always ready to step up and take action on behalf of the issues she believes in,” says Wayne Pacelle, president and CEO of The Humane Society of the United States. “She was there for us during the successful Prop 2 campaign in California, lending her voice to a measure that will improve the lives of farm animals, and now she is helping us in our bid to end the pain and isolation endured by lab chimps.”

Upon receiving The HSUS’ Animal Advocate Award at a recent reception in Los Angeles, Charlotte joked that, “Capitol Hill was an eye opener – it makes Hollywood look like a cake walk!” She added, “The Great Ape Protection Act and Cost Savings Act is way overdue. We are the only industrialized nation that still tests on chimps. This bill is going to pass; it’s just a matter of time.”

The Great Ape Protection and Cost Savings Act would retire the more than 500 government-owned chimpanzees to sanctuaries and end breeding of chimpanzees for invasive research, while saving taxpayers approximately $30 million per year.

Charlotte is the official celebrity spokesperson for Operation Blankets of Love, an organization that collects, transports and distributes pet-related items to comfort animals in shelters. She shares her home with two rescue dogs, Taco, whom she found limping and homeless in Puerto Rico, and Tyler whom she adopted from a shelter and who is now the official mascot of National Mutt Day, created by the Animal Miracle Network.

Best known for her role as Detective Connie McDowell on the long-running hit TV series NYPD Blue, Charlotte has since starred in many feature films, including The Umpire and Drive Angry, both with Nicolas Cage, and Street Kings: Motor City with Ray Liotta.