Robin Thicke To Perform For VH1's Save The Music Foundation 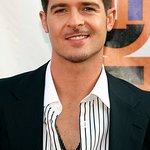 On Thursday, April 26th, the VH1 Save The Music Foundation will launch the 2012 Songwriters Music Series in Chicago, IL with an acoustic performance by Award-winning, soul singer-songwriter Robin Thicke.

Songwriters Music Series benefits the VH1 Save The Music Foundation in their mission to provide children with access to a complete education that includes music. These intimate evenings serve as a platform for energized, informed and socially conscious individuals to network amidst great music, a sponsored bar and food. Each event will also feature today’s emerging musicians and most celebrated artists/bands performing hit songs in support of the cause. In total, the 2011 Songwriters Music Series raised over $358,000, which was enough to restore 11 music education programs nationwide. This year, the Foundation hopes to raise even more so that a greater number of students are provided the tools they need to create, innovate and become the next great leaders in an increasingly competitive world.

“The VH1 Save The Music Foundation does so much work to ensure that future generations will have the instruction and instruments to help them pursue their dreams,” said Robin Thicke. “I’m just honored to be able to help the cause and put on a show for the amazing city of Chicago.”

Multi-platinum superstar Robin Thicke will kick off the 2012 Songwriters Music Series with a special performance for a select group of ticketholders. Robin’s fifth studio album, Love After War was released on December 6th, 2011. The Associated Press calls Love After War a “must buy,” Billboard says “Thicke has consistently shown himself to be one of R&B’s most devoted ladies’ men” and Entertainment Weekly calls the album “ever-seductive.” The album is Thicke at his most raw and honest condition yet. It is an album born out of a desire to be the uncompromising, idealistic artist he was as a boy, married with the weight of being a man with responsibilities and the scars of the past. Love After War and songs you’ll discover within it, like “An Angel on Each Arm,” “I’m An Animal,” “Never Give Up,” “Cloud 9,” “Pretty Lil’ Heart” and “Tears On My Tuxedo” need no explanation: they speak for themselves. The album follows Robin’s past hits A Beautiful World, The Evolution of Robin Thicke, Something Else and Sex Therapy.

“We are thrilled to have Robin Thicke perform at the launch of this year’s Songwriters Music Series,” said Paul Cothran, Vice President & Executive Director of the VH1 Save The Music Foundation. “Last year’s events provided an exciting opportunity for music enthusiasts to share in and spread the word about the power of music. Having an incredible performer and entertainer like Robin Thicke help us launch the 2012 Series is a great start to what will be another great year.”

The Chicago event will take place at an, as yet, undisclosed location from 6:30 PM-10:00 PM and will include opening performances by local sponsors Sing4’s YouTube Contest Winner and Houlihan’s Restaurants employee musicians contest winners. This year, beginning with the first installment, the Foundation will also present an exclusive social media initiative, “Songwriters Moments In Time with RAYMOND WEIL,” which will give audiences everywhere a behind the scenes look at each Songwriters event, with special talent interviews and more. Additional local sponsors include: New Amsterdam Gin, Tequila and Vodka as well as PSAV Chicago.

Tickets for the evening are $100 and can be purchased at www.vh1savethemusic.org/songwriters.

Crash & Burn Apparel, a rock-n-roll inspired clothing line based in Los Angeles has teamed up with the Songwriters Music Series to create a limited edition Songwriters T-shirt to benefit the VH1 Save The Music Foundation. The Songwriters T-shirts will be available for purchase at www.shopcrashandburn.com/songwriters beginning April 1, 2012.

On April 10th, the first phase of the 2012 Songwriters Music Series auction will launch online at www.charitybuzz.com/auctions/Songwriters, featuring items like 2 tickets to VH1 Storytellers, 2 tickets to the 2012 Do Something Awards and tickets to the Rock of Ages movie premiere and after party.

Proceeds from event sponsorship, ticket sales, the auction and a portion of t-shirts proceeds will benefit the VH1 Save The Music Foundation in its mission to keep music alive in American public schools.

For more information or to see how you can get involved, visit www.vh1savethemusic.org or join the VH1 Save The Music community on Facebook at www.facebook.com/vh1savethemusic and on Twitter at @vh1savethemusic.