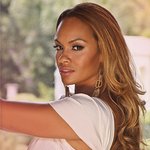 Los Angelenos got an eyeful yesterday when Basketball Wives star Evelyn Lozada — a former fur-wearer who had a change of heart and gave up fur for good after she saw for herself how animals suffer on fur farms — unveiled her cheeky new winter-themed naked anti-fur ad for PETA.

The ad, which was shot by top celebrity photographer Drexina Nelson.

“You can verbalize what happens to these animals a thousand times, but [when] you see it, it definitely clicks in—and it did for me,” Lozada explained in an exclusive interview with PETA. She talked about video footage of animals on fur farms, where animals are crammed into tiny and filthy cages, beaten, and strangled with wire nooses. They are often skinned alive in order to make fur products. “I [saw] how these animals are tortured and skinned, and you don’t really realize the hurt and the pain that they go through just for fashion, and I want to be a voice for them.”

Lozada’s life and relationships have been documented on all four seasons of Basketball Wives, VH1’s highest-rated show.

Lozada joins a growing list of celebrities — including Wendy Williams, Eva Mendes, Christy Turlington, and Taraji P. Henson — who have renounced fur and then volunteered to appear in PETA’s iconic naked campaign.