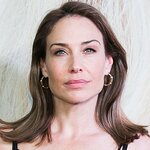 Claire recently wrapped a six-part miniseries, Departure, starring alongside Oscar-Winner Christopher Plummer and Archie Panjabi. Claire was recently in the feature films Five Feet Apart, and Precious Cargo with Bruce Willis. Claire starred opposite Sophie Turner in Another Me, in Hallem Foe with Jamie Bell, Flashback of a Fool with Daniel Craig and Felicity Jones, The Medallion co-starring with Jackie Chan, Antitrust alongside Tim Robbins and Ryan Phillipe, Boys and Girls, Universal’s Mystery Men opposite Ben Stiller, and in The Rock with Sean Connery and Nicholas Cage. She portrayed artist Jean-Michel Basquiat’s girlfriend “Gina” in Basquiat opposite Jeffrey Wright for director Julian Schnabel and starred in Green Street Hooligans with Elijah Wood and Charlie Hunnam. Claire played “Susan Parish” opposite Brad Pitt and Antony Hopkins in Meet Joe Black, and “Brandi” in Kevin Smith’s Mallrats.

Claire’s other television work has been playing the recurring character “Alicia Brown” in Hawaii Five-0 for CBS, and she can be seen in the miniseries Running for Her Life. She’s also played the recurring roles of “Lauren Hunter” on NCIS LA, “Queen Igraine” in the Starz drama series Camelot, “Payton Driscoll” in CSI NY, with further recurring roles in Nightmares and Dreamscapes by Stephen King, The Diplomat, Ice, and the miniseries The Pentagon Papers co-starring with James Spader and Paul Giamatti

Copyright © 2021 Look to the Stars, All rights reserved.

Activity
Social reach
Google trends for "Claire Forlani"
Available to Insiders only
Get Insider Access to these insights & more...

You can contact Claire Forlani using details from this service. (Or read our advice on how to contact celebrities) 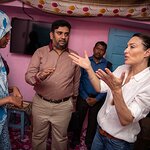 On Tuesday, October 29th actress Claire Forlani joined the International Union Against Tuberculosis and Lung Disease (The Union) and more than 2,500 delegates including political leaders and health officials, doctors, researchers, nurses, tuberculosis (TB) survivors and civil society organisations from around the world at the 50th Union World Conference in Hyderabad, India. More →

We don't have any videos related to Claire Forlani.