Prince Harry started the first event of America’s Warrior Games this week as a leading Forces charity said it was determined to help The Prince bring the championship to Britain.

As Prince Harry set off a group of injured troops in the hand-cycle event he said the sporting spectacle for wounded servicemen and women could be a huge global attraction like the Olympics.

The Prince helped launch the Paralympic-style competition yesterday when he joined Olympic swimmer Missy Franklin and blind US Navy Lieutenant Brad Snyder in igniting a large symbolic flame during the Games’ opening ceremony.

Bryn Parry, co-founder of Help for Heroes, which has funded the British team’s participation in the Warrior Games, said that with Prince Harry’s help an international competition for wounded servicemen could take place in London next year.

Gesturing to the large number of broadcasters, photographers and journalists, The Prince added: “You’ve got all these guys here – it’s not always great having them around – but today it’s fantastic to get the message across to every other country that has eyes on here at the moment.”

In a speech yesterday given ahead of the Warrior Games opening ceremony, Prince Harry said: “I only hope in the future, the near future we can bring the Warrior Games to Britain and continue to enlarge this fantastic cause.”

Bryn Parry, co-founder of Help For Heroes, said before the start of the cycle race: “If Harry can set up the vision, we can make it happen.”

Mr Parry said high-profile events for injured veterans would become “vital” to keep their lifelong need for support in the public eye once Britain pulls out of Afghanistan.

Martin Colclough, head of physical recovery for Help For Heroes, said that if he was a betting man he would put money on a Warrior Games-style event happening in London in 2014, with US, Australian and other Allied nations taking part.

He said: “For me that would be the goal. We’ve had it in mind for a while, that we could pull off something like that. I would bet on it happening next year. There is considerable momentum coming from various organisations.”

He said morale in the British camp was “incredibly high” because of Prince Harry’s presence: “A colleague and a peer coming along and supporting your team – I don’t think you can measure how much that would have added to the effort the guys are going to put in today.”

Prince Harry, who is touring the US, was later given a tour of the air force base hosting the cycling races and also had an American football training session, during which he watched a display of gymnastics by the cheerleaders.

Before leaving he presented the medals in one of the women’s cycle races, kissing the recipients on both cheeks. 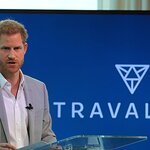 His Royal Highness the Duke of Sussex has launched ‘Travalyst’, a new partnership which brings travel companies together to come up with solutions to make travel more ethical and sustainable. More →