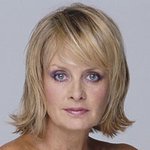 Twiggy said, “Fur looks beautiful on animals, but very ugly on humans. Fur is literally ripped off animals backs and it can take many animals to make just one coat. The UK prides itself as a nation of animal lovers, so I am asking London Fashion Week to make an ethical choice and reject real fur.”

Around 50 million animals are killed around the world each year for their fur. Whilst fur farming is banned in the UK, the rising fur trend has fuelled UK demand. Over 40% of fur sold in the UK is from Finland, where ADI went undercover to reveal video and photographic evidence of the horrific conditions and cruelty on certified fur farms for ADI’s fur report ‘Bloody Harvest’.

Fur Stop supporter Alesha Dixon says, “I think killing animals to steal their fur is not only unnecessary but cruel and goes against everything I believe in. There are so many beautiful fake fur products on the market, why do we need to make poor innocent creatures suffer in the name of vanity? I fully support ADI’s Bloody Harvest report in their quest to wipe out these acts of cruelty!”

With offices in London, Los Angeles and Bogota, Animal Defenders International campaigns across the globe on animals in entertainment, providing technical advice to governments, securing progressive animal protection legislation, drafting regulations and rescuing animals in distress. ADI has a worldwide reputation for providing video and photographic evidence exposing the behind-the-scenes suffering in industry and supporting this evidence with scientific research on captive wildlife and transport. ADI rescues animals all over the world, educates the public on animals and environmental issues. For more information on how you can help, visit www.ad-international.org.