A new celebrity viral video from Sandy Hook Promise has been launched as part of the organization’s national “Parent Together” campaign that seeks to educate and empower parents to prevent gun violence in their communities.

As an organization founded by family members who lost children and loved ones in the Newtown tragedy on December 14, 2012, Sandy Hook Promise launched Parent Together in the days leading up to the one-year mark of the mass shooting to ensure that Sandy Hook is remembered as a place where real and lasting transformation began.

Emphasizing mental wellness, connection to community and gun safety, the Parent Together campaign seeks to bring parents together around their common love for all children to help prevent not just the next Sandy Hook tragedy, but thousands of other acts of gun violence every year.

Parent Together was developed in conversations with parents across the country — gun owners and non-gun owners, Republicans, Democrats and Independents, people of many faiths and from across the economic spectrum. These conversations led to one overwhelming finding: that a parent’s love and concern for their children comes before everything, including their politics.

As part of Parent Together, Sandy Hook Promise will provide proven tools and programs to communities so that parents can focus on mental wellness, community connectedness and gun safety as ways to help prevent gun violence in homes, schools and communities across the nation. 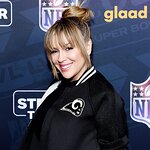 Last week GLAAD and the NFL hosted ‘A Night of Pride,’ sponsored by Pepsi Stronger Together, at SoFi Stadium in Inglewood California. More →