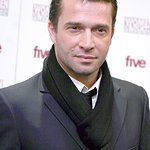 Small Steps Project is honoured to name The Following actor James Purefoy as their celebrity Ambassador.

Over the years James has been a massive support to the charity, he has been to their events, featured in their documentary and inspired many of his celebrity friends to take small steps and donate their shoes. Thanks to James, famed for his role as Mark Anthony in Rome, Small Steps Project have had shoe donations from Sienna Miller, Rachel Weisz, Eva Green, Sharleen Spiteri, Kevin Bacon and Kyra Sedgwick.

This year he has asked many of his co-stars from ‘The Following’ to take part in the annual Celebrity Shoe Auction including Shawn Ashmore from X-men, Valorie Curry from Twilight and of course Kevin Bacon from pretty much everything.

James explains what made him become our celebrity ambassador, “What Small Steps have achieved in their relatively brief existence is akin to a minor, but very beautiful, miracle. They have turned lives around. They are the embodiment of that lovely phrase ‘Be the change you want to see in the world’. I am proud and humbled to be associated with them.”

Small Steps Project’s mission is to support children around the world who live on rubbish dumps and survive from scavenging.