Kings Of Leon And Pearl Jam Give Back To Sandy Hook 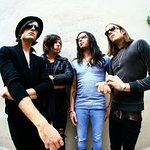 Almost one year ago, a horrific shooting rampage in Newtown, CT took the lives of 20 first-graders and six educators at Sandy Hook Elementary School.

This week, Kings Of Leon, Pearl Jam, Tim McGraw, Nick Offerman, Zachary Quinto and more have united with online charity auction site Charitybuzz to raise funds and awareness for Sandy Hook Promise, an organization founded by parents and spouses who lost loved ones in the tragic mass shooting.

The national nonprofit led by community members works to honor all victims of Sandy Hook by preventing the causes of gun violence and helping the local community cope with the lasting effects of the tragedy. Find out more about the charity here.

The Sandy Hook Promise online auction is open for bidding through Tuesday, December 17th at www.Charitybuzz.com/SandyHook.

Auction highlights include:
• Lunch with Nick Offerman on the set of Parks and Recreation in Los Angeles
• A Fender Guitar signed by Pearl Jam and a copy of their set list from the concert
• Meet Kings of Leon at their concert at Mohegan Sun Arena in Uncasville, CT
• Enjoy a set visit to Modern Family in Los Angeles
• Meet Zachary Quinto at a performance of The Glass Menagerie on Broadway, with two premium seats
• Enjoy an exclusive tour of the Facebook Silicon Valley Campus
• Enjoy a taping and cocktails at Bravo’s Watch What Happens Live! with Andy Cohen in NYC
• A round of golf with Joe LaCava, caddy for Tiger Woods, at Newtown Country Club
• Tickets to a taping of NBC’s The Voice season 6 in Los Angeles
• A Taylor Guitar signed by Tim McGraw
• and more!