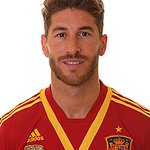 Real Madrid and Spanish National Team star football player, Sergio Ramos, was appointed this week as UNICEF Spain’s newest ambassador during an event with youth in the Brazilian city of Curitiba where he is participating in a UNICEF program for the promotion of fair play and the right to sport.

Sergio Ramos has been a longtime supporter of UNICEF’s work on behalf of the most vulnerable children, visiting child survival programs in Senegal, leading and participating in solidarity matches such as Champions for Africa and Champions for Life, recording messages of support, donating personal objects and memorabilia to raise funds for UNICEF programs, and participating in television specials for the most vulnerable children.

His appointment comes at an exciting time – the start of World Cup in Brazil and the kickoff of the ‘Team UNICEF’ initiative, which aims to use sport to promote tolerance, peace, respect, and also encourage cooperation and leadership among young people. It further aims to focus on the need for children to be protected from violence.

During this week’s ceremony in Curitiba, Ramos stated, “As an ambassador for UNICEF Spain, it is an honor for me to help the initiatives of the organization on a larger scale to ensure that we strengthen the rights of children. I am thrilled to join ‘Team UNICEF’ during the World Cup and to support UNICEF’s work for the promotion of sport and for the protection of children. I just had a son and I cannot imagine the pain of not being able to protect him from any circumstances that would prevent him from fully enjoying his rights.”

The Executive Director of UNICEF Spain, Javier Martos, conveyed his appreciation to Sergio Ramos on behalf of the organization for his continued collaboration throughout the years: “This recognition comes after many years of selfless efforts on behalf of children, both through public events and private meetings, in which Sergio has demonstrated sensitivity and full commitment to the most vulnerable children through his willingness to support UNICEF’s work worldwide.”

“We all have to find a way to support the most vulnerable children,” said Ramos, who has been with the Spanish Selection since 2005. "All children have the right to survive, to develop their potential, to play and have a future full of opportunities. UNICEF’s work is fundamental to achieving this.

“I am proud to collaborate with UNICEF because I trust their work and I’ve seen firsthand their achievements during a trip to Senegal. I will help share UNICEF’s message and campaigns with many other people who also want to help.”

“Sport is more than just physical exercise or competition for a trophy. When a child plays, he is exercising his right to be a child. But sport also helps children grow into healthy adults, to exercise more solidarity amongst their friends, to follow rules and learn to play as part of a team,” added Ramos after chatting with a network of youth and adolescents supported by UNICEF which promotes safe and inclusive sport in several communities with limited resources Curitiba.

After talking with the youth, the new Spanish Ambassador played a brief and impromptu football game.