Carrie Fisher To Be Honored By The Midnight Mission 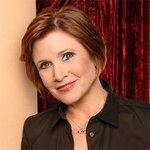 The celebratory occasion will take place on Tuesday, September 30th, from 6 p.m. to 9 p.m. at the Beverly Wilshire Hotel and tickets can be purchased here.

A surprise honoree for The Golden Heart of the Century award will also be announced the night of the gala. All will be recognized for their substantial contributions to The Midnight, as well as their personal advocacy on behalf of Los Angeles’ neediest population. American rock icon Richie Sambora and Australian guitar sensation Orianthi will deliver a musical performance. KLOS radio personality Gary Moore will provide the evening’s entertainment.

Commemorating a century of service, The Golden Heart Awards Gala jointly honors The Midnight’s longstanding legacy to the City’s neediest, as well as those individuals whose contributions embrace the organization’s transformative spirit of giving. As Southern California’s premier social service provider, The Midnight marks its milestone by never missing a day of service since 1914.

Celebrities, individuals and organizations are invited to join as sponsors or purchase a seat at $350 or a table for $3000. Contributions will benefit The Midnight’s vital community programs, including job training, tutoring, health and wellness, 12-step recovery program, emergency services and more.