Look To The Stars Exclusive: Preparing For The Emmy Awards

Look To The Stars Celebrity Ambassador Rachel Zeskind was lucky enough to attend the 60th Primetime Emmy Awards earlier this week. In this article, she gives us a candid view of the preparations a star must go through to look good on the red carpet while reminding us that it is important to love who we are inside:

Here it is, the real deal, literally behind-the-scenes of my Emmy preparations.

But before we dive in, let’s review a bit of back history to set the tone. I am sure you can imagine the pressure on actors and actresses to be attractive, thin, youthful and desirable is huge. These pressures cause many, many people in the entertainment industry a great deal of problems as beauty icons have come out admitting to personal struggles with self image, depression, drug use and eating disorders to name a few.

Many women (and men) look at the stars who appear dazzling and perfect from the red carpets and the pages of magazines and think that that is what beauty is – that is where the bar and standard is set. This has led to many self image issues from self-loathing to insecurity in many people all around the world.

However, those dazzling images of the celebrities of today are created by a team of people. There is no way they roll out of bed in the morning or hang around their houses looking like that. The reason I am telling you about this is because it is my deep desire to help people everywhere love and accept themselves and feel more comfortable and confident in their own skin.

This is the kind of work it takes:

After a month of working out with my amazing personal trainer Drea, eating an incredibly healthy organic high protein-low carb diet, drinking tons of water and using gobs and gobs of skin care products to bring my body and skin into the best shape, I was ready to hit the spray tan machine and get my fake (but safe) golden sun kissed glow.

Now I was ready – or at least as ready as I could have gotten myself – to turn myself over to a team of experts, as all celebs do…that’s right, before every public appearance the celeb’s entourage of beauty magicians hover in from beauty heaven and perform miracles before sending the perfectly crafted exterior image of the star out the door.

My process of meeting with this creative team to consult with them regarding my image for the Primetime Emmy event began about a week prior. It all began when Tal Sheyn arrived at my home with an array of beautifully crafted dress sketches and her design portfolio. I picked one, asked for a crimson color and turned my faith in her skilled direction. A few days later my first fittings took place, after which I selected my jewelry from gifted jewelry designer Heather Capps’ new line Creative Brazil.

Now, I had one unusual request. I wanted to make a political statement and carry a purse that bore ‘Obama ’08’ on it. The question was how to do this fashionably and not as a tacky bumper sticker statement. Heather Capps carefully designed a purse living up to said criteria using matching fabric provided by the dress designer Tal Sheyn, who also had input on the Obama statement as I had originally wanted it to be embedded into the dress. Wisely she talked me out of that one and suggested a purse, allowing me to dodge a bullet dolled out by the fashion police.

By my final fitting for the gown just a day and a half before the event, my tummy was looking bloated and not perfectly flat, so to avoid any embarrassing ‘baby bump’ rumors a very tight lining was deemed the solution and sewn into the dress. I have heard that even some of the thinnest stars and models do the very same thing.

Fact: I still had to suck my stomach in all night and eat very light meals throughout the day…I’m talking nibbling on fruit mostly.

So on the day of the Primetime Emmys, I woke up at six am, picked up jewelry and the now-called ‘Obama bag’ at Heather Capps, then showed up at the designers studio at 9am looking as good as I could from the inside out.

I was met by Kobi Cohen – the hair stylist – and his secret box of hair miracles and began having hair extensions put in place.

After two hours I was finally ready for makeup and, since Tal Sheyn had begun her career in the fashion and entertainment world as a celebrity makeup artist, we had both felt that she would be the best makeup artist for the job – she was designing the overall look from head to tow in her mind. So, on came the makeup! Suddenly I had perfect skin and chiseled check bones and eyes that looked wide and young.

Finally at 3pm – yes, six hours after I had arrived – I was ready to slip into the couture princess gown and accessories and head off to the ball.

This amazing look was created by a gaggle of highly gifted and creative people. The gown was designed for me by designer Tal Sheyn (www.designbytalsheyn.com), she also did my make up (www.talsheynmakeup.com). All jewelry was Creative Brazil designed by Heather Capps (www.creativebrazil.net). The shoes were by Jacob at Shoes For The Stars, hair by Kobi Cohen, and the entire days preparations were photographed by Kevin Break (www.lastyle.net). 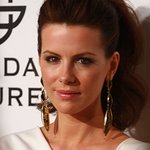 The stars came out on October 13 for the Fulfillment Fund's annual benefit gala. More →