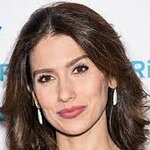 Dutesco’s art gallery served as the backdrop to the kick-off event.

Following a compeling short video about Bent on Learning’s program and the announcement that Julianne Moore will host the upcoming 2015 gala on March 12, 2015 by Bent On Learning’s co-founders Anne Desmond and Jennifer Ford. Alec and Hilaria Baldwin surprised and delighted guests by joining an impromptu yoga session with the students in attendance.

Founded in 2001 when three yoga teachers met by chance in their mutual pursuit of bringing yoga to urban youth, Bent On Learning is a nonprofit organization committed to teaching yoga to New York City public school children. The organization is the first to bring free yoga programs into schools during the academic day and is paving the way for making health and happiness an integral part of the curriculum of our schools.

Studies show that yoga’s combination of movement with breathing, relaxation and meditation not only improves physical health, but also has a positive impact on emotional and cognitive intelligence — making children better prepared for learning and for personal success! Over the past 14 years, Bent On Learning has taught yoga to approximately 18,000 students throughout Brooklyn, Manhattan, Washington Heights, Harlem and the Bronx. Find out more here.