Scotland And England Unite To Protect Children From Ebola 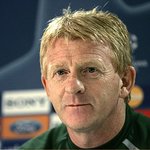 An urgent television appeal to help protect children in danger from the deadliest ever Ebola outbreak will be broadcast during the Scotland v England international on Tuesday night to raise money for UNICEF's Emergency Ebola Appeal.

The appeal, which will be led by Scottish Manager Gordon Strachan, player Darren Fletcher and England Captain Wayne Rooney, will call on the British public to join them in the fight to beat Ebola by donating to the appeal being led by the world’s leading children’s organisation.

The UK Government will match pound for pound all public donations made during the game.

The televised appeal comes as the number of people who have lost their lives to the disease reaches 5,000 and over 13,000 are infected across Guinea, Liberia and Sierra Leone. One in five of these patients are children and around 7,000 more children have lost one or both their parents to the disease. Schools and health facilities for pregnant women are closing, and vital vaccination programmes for children are halting because of the emergency.

Unicef is working in all three countries to control the disease, providing life-saving supplies to treat and protect children affected, and to support those who have lost loved ones, but the organisation urgently needs more donations to help keep every child safe.

Prime Minister David Cameron said: “The UK has secured real action from G20 leaders here in Brisbane but the generosity of the British people in helping those caught up in the Ebola crisis in West Africa has been second to none. That’s why we will match up to £5m of the money raised during Tuesday’s match, helping to make a real difference to the families and children living under the threat of the disease.”

Darren Fletcher of the Scotland Football team said: “Scotland v England is always an important match, but for once the game is about far more than just football. On Tuesday night I urge all our fans to transfer their passion for the Scottish football team into helping these children so we can really make a difference to their lives.”

Captain of the England team Wayne Rooney said: “Right now, children are in danger from Ebola and they need our help. As a dad, I can’t imagine what it’s like for your child to be at risk of this deadly disease. Tune into the game to see two footballing nations come together to help protect children and their families and find out how you can help too.”

Unicef UK Executive Director David Bull said; “Normal life for children affected by Ebola is on hold. Schools are closed and games of football have stopped as everyone focuses instead on survival. Many children have already lost their lives to this deadly virus. And for those who survive, the trauma is not over. Many more are being left traumatised and alone as they struggle to deal with the loss of loved ones. On Tuesday night, football can bring two nations together to help keep these children safe and give them a chance for a better future. Please, while you enjoy the game, help us to keep children safe from Ebola and pledge your support for Unicef’s urgent appeal.”

Viewers of the match on both ITV and Sky Sports will be able to see the appeal just before kick-off at 8pm and then again during half time where they will be urged to help by texting the word ‘KIT’ to 70333 to donate £5. 100% of all text donations will go to the charity to be spent on the charity’s Ebola appeal.

£5 will help provide supplies for Ebola kits – such as gloves, masks, soap and chlorine – to protect children and their families from this deadly virus. To find out more about Unicef’s work on Ebola visit www.unicef.org.uk.