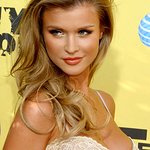 Supermodel Joanna Krupa bares it all in a new PETA ad in which the star wears only black and white bodypaint to look like an orca floating in a tiny, confining fishbowl beside the words “Captive Orcas: Sad. Lonely. A Long Way From Home” as a large human hand menaces her cramped prison from above.

Krupa uses her star power to draw attention to the plight of orcas held captive in tiny tanks at SeaWorld’s parks, where they suffer from severe mental and physical deprivation. “[In America, you] can walk to the store. You can do whatever you want — you’re free,” Krupa says in an exclusive video public service announcement. “These animals, they’re in prison their whole life.”

Calling for a boycott, Krupa lays out her objections to captivity: “I can only envision and feel the pain of these animals being stuck in a tiny aquarium, because normally orcas … swim 100 miles a day. [H]ere, they’ve been captured since they were little babies or they’re masturbated to … make more babies. … It’s like, why? For the profit of selfish human beings?” She continues, “I had no idea this goes on, and now other people may not know that this goes on, either, and I want to educate them. I want to inspire other people to do good.”

In the wild, orcas work cooperatively to find food and share intricate relationships, while SeaWorld has separated at least 19 young orcas from their mothers. And instead of traversing vast expanses of ocean every day, the orcas at SeaWorld are forced to perform circus-style tricks for food and are even sometimes given the drug diazepam to manage stress-induced and aggressive psychotic behavior. Following the release of Blackfish, attendance at SeaWorld parks dropped and the company was named one of the most hated in the U.S. in a Consumerist poll.

Krupa is part of a growing list of celebrities—including Jason Biggs, Marisa Miller, Jessica Biel, Tommy Lee, Bob Barker, Eli Roth, Kelly Slater, Tony Kanal, Joan Jett, Alec Baldwin, and Kathy Najimy — who’ve teamed up with PETA, whose motto reads, in part, that “animals are not ours to use for entertainment,” to speak out against SeaWorld’s cruelty to marine mammals.