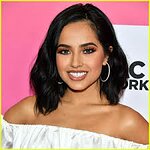 Get ready to rock this holiday season during The Salvation Army's sixth annual Rock the Red Kettle concert.

Taking the stage will be some of music’s top up-and-comers, including returning headliner Becky G, with additional performances from rising singer songwriter Jacob Whitesides and rising young pop artist Jake Miller. The free concert, which will take place on Saturday, December 5 at 5 p.m. PT at the L.A. LIVE Event Deck in Downtown Los Angeles, will be streamed live on RedKettleReason.org.

This year’s Rock the Red Kettle performers will also share their personal motivations for giving by posting their #RedKettleReason throughout the holiday season and inviting their fans to do the same.

Fans can also win awesome prizes for sharing their #RedKettleReason in the weeks before the concert. The Army is partnering with Teen Vogue to give fans the chance to win a retweet from their favorite performers, a trip to L.A. to attend the Rock the Red Kettle concert or even the chance to meet the artists before the show. For more information, visit teenvogue.com/redkettlereason.

“I am excited to be involved with Rock the Red Kettle for the second year. One of my favorite things last year was seeing all of the amazing #RedKettleReason posts my fans shared,” said Becky G. “I support The Salvation Army because I know firsthand that the money they raise goes toward ensuring families will have a roof over their heads and kids will not go to bed hungry. My family struggled when I was younger, and we were lucky to have organizations like The Salvation Army help us get through tough times.”

“The Salvation Army is one of those organizations that people know about – but may not realize all of the awesome things they do,” said Jacob Whitesides. “I want my fans to know that they can help make a difference in someone’s life by doing something as simple as dropping the change from their pocket into a Red Kettle at the mall or just going online to share their #RedKettleReason. I grew up watching my mom work multiple jobs to support my sister and me and I feel lucky to be in a position to give and ask the fans in my life to give back too.”

“I’ve been really inspired to learn about all the great things The Salvation Army does,” said Jake Miller. ""It’s an honor to perform on their behalf and celebrate giving back during the holidays."

In addition to Becky G, Jacob Whitesides and Jake Miller, this year’s concert will feature other up-and-coming artists including Quinn Martin, Alec Bailey and Tahj Mowry.

“This is such a powerful and talented generation of young artists, and their desire to partner with us and show their fans the true meaning of the holiday season is inspiring,” said Lt. Col. Ron Busroe, community relations and development secretary for The Salvation Army. “It does not matter whether you are rich or poor, young or old, we all have the ability to offer hope and change to those in need, by supporting The Salvation Army.”

“We are excited to host Rock the Red Kettle at L.A. LIVE again this year and offer a night of free entertainment while raising awareness for an iconic organization,” said Lee Zeidman, president of L.A. LIVE. “We enjoy our partnership with The Salvation Army because the Red Kettle Campaign has such a positive impact in communities nationwide.”

Rock the Red Kettle will raise awareness of the 125th annual Red Kettle Campaign, the oldest charitable fundraiser of its kind in the United States. Money raised during the campaign helps The Salvation Army serve approximately 30 million of America’s most vulnerable through an array of social services, including food for the hungry, shelter for the homeless and toys for children at Christmas.

“Rock the Red Kettle is an awesome way to celebrate the 125th anniversary of the Red Kettle campaign,” said Ned Specktor, the show’s producer. “The concert provides a unique way to educate the future generation about the importance of helping those in need with the help of The Salvation Army and through the power of music.”

The concert will be streamed live on RedKettleReason.org so music fans and young philanthropists near and far can join in on the fun. In addition to giving online or to the more than 25,000 Red Kettle bell ringers found on street corners and retail entrances across the country, supporters can donate through the Army’s text-to-give program. By texting the word “KETTLE” to 80888, donors can send $10 to the Red Kettle Campaign through December 24.

From its humble beginnings as a San Francisco donation collection by Salvation Army Captain Joseph McFee in 1891, the Red Kettle Campaign has grown into one of the most recognizable and important charitable campaigns in the United States. It enables The Salvation Army to provide Christmas toys for kids, coats for the homeless, food for the hungry and countless social service programs year-round.

To learn more about the event and get tickets, visit redkettletickets.com.