Exclusive: Ta'Rhonda Jones Talks Being a Voice for Youth and Girl Empowerment 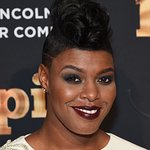 The gala was co-hosted by The Real’s Loni Love, and featured a performance from R&B music star Avant. The Salute Her tour recognizes women who share a common commitment to make a positive contribution to strengthen their respective communities.

At the luncheon, Ta’Rhonda Jones took time out of her demanding agenda to talk to LookToTheStars.org about her work with youth and with her local community.

How have you been able to use your platform as a celebrity to support your local community or specific social causes?

Next Friday, I will be throwing an event for the kids at my old high school. I’ve been going from school to school talking to the kids because today, in this new day and age, believing is a fairy tale. No one uses the word believe or faith. I just want to be the voice for the ones who are not as outspoken as I am to let them know that anything possible, you just have to want it.

I feel like today, women, especially our young girls, don’t have enough role models. Every time you turn on the TV, or you look on social media, or anything, you see women that are voluptuous, with a face full of makeup. Girls look at that and they think that’s it. They think that that is the way to be or that is how they should be.

Simeon! Home of the Wolverines!

Will working with young girls be one of your special causes?

I would love it to be! Even before Empire, I’ve always had a lot of girl look up to me. Even my friends, and my older sisters; I have 8 siblings! And they all look up to me.

When I landed the role for Empire they told me, “We knew you were gonna be something. We just didn’t know what or when.” A lot of people always ask, “Well, how did they react to you gaining this role,” and I say, "They’re excited, but not like ‘OH YEAH!’ because they already knew this was bound to happen.

So like I said, I want to be that voice for young girls. I want to be able to guide them. I feel like girls today don’t have enough guidance.

If you could give young girls three pieces of advice, what would it be?

Oh, I only have two – and it’s two words. Two rules in life I live by, which are lie and steal. Lie down your own rules, and steal every opportunity that comes your way.

Do you have any other charity events coming up on your schedule?

Right now, I just want youth to be able to express themselves, so I want to continue going from school to school and host these talent showcases, which is what I’m doing for Simeon.

What are your thought’s about the recent backlash that NBA player Stephan Curry’s wife, Ayesha Curry, received regarding her preference for classy clothing over more revealing clothing?

I love it! You know? Something needed to be said. I feel the same way. A lot of women got offended, but if the shoe fits, wear it. There’s nothing wrong with showing a little here and there, but leave imagination for some folks.

Do you think if more women like you and Ayesha Curry spread that kind of message more, then more young women will get it?

It takes a village to build a home. Two or three women who feel the same way as myself and Ayesha Curry wouldn’t change a damn thing. Just two folks having the same opinion wouldn’t matter.

Congratulations to Ta’Rhonda Jones on her Salute Her: Gentle Treatment ‘Woman of Style’ award and we wish her the best on her commitment to empowering today’s youth.