Jo Brand Completes A Hell Of A Walk For Sport Relief 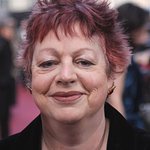 An exhausted but ecstatic Jo Brand crossed the finish line of her BT Sport Relief Challenge: Jo Brand’s Hell of a Walk on Thursday, having clocked up an incredible 135.7 miles in her journey which took her from east to west across the width of the UK.

The challenge is sponsored by BT, a long-term supporter of Comic Relief challenges since 2009.

Jo was greeted at the finish line by Sport Relief legend John Bishop, who announced that she has burnt over 40,000 calories, taken over 500,000 steps and, most importantly, has raised an incredible £662,228 so far – but the money is still coming in, and her final total will be revealed during the Sport Relief Weekend (18-20 March).

On finishing her challenge Jo said: “I feel shattered. But I wanted to do this to raise shed loads of money for Sport Relief because it helps a huge amount of people. Especially projects that mean a lot to me. But also, I wanted to show fat old women that they could walk! It was so windy – can you believe someone of my weight was blown over by the wind?! But it was so fantastic to walk across a massive swath of the country and see how generous, friendly and community-minded people are. I can’t thank everyone enough. It’s overwhelming”.

Jo set off on the BT Sport Relief Challenge on Friday 22nd January, taking on a route across the width of the country. She battled blisters, aching limbs, uncertain terrain and Storm Jonas with its driving rain, hail and 60mph gale force winds that literally blew her off her feet. The terrain and weather were so severe that they even forced minor route changes following advice from her trainer Professor Greg Whyte and her medical team. In the end, she reached the finish in Liverpool having completed an incredible 135.7 miles in conditions described by Greg Whyte as ‘brutal’.

Davina McCall, who joined her on day five said, “It’s tough and she’s been amazing. She’s done a great job. In the back of her mind keeping her going is what Sport Relief do. She knows where the money goes and how important this is. This is to raise money for a fantastic charity which helps amazing causes all over the world and right here in the UK”.

All the ups and downs of Jo’s challenge will be captured for a BBC documentary, to be broadcast in the run up to Sport Relief Weekend, which is taking place from Friday 18th to Sunday 20th March.

Money raised from Jo’s monumental effort will be spent to help change the lives of people living incredibly tough lives – both here in the UK and across the world’s poorest communities.